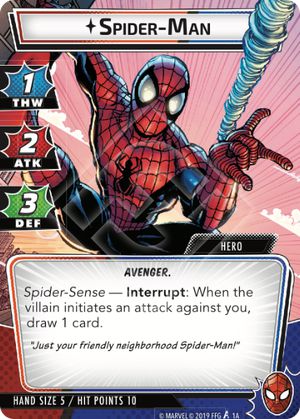 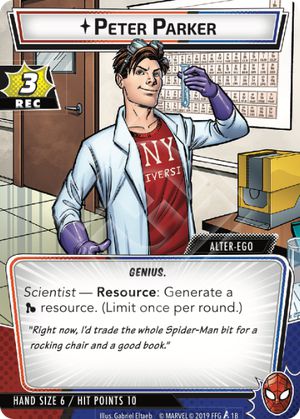 Q: When does the villain “initiate” an attack against Spider-Man?

A: An attack is “initiated” the moment the game determines an attack will be made against a character. This includes attacks made from game steps (such as step 2 of the villain phase) and card abilities (such as an attack initiated by the “Assault” treachery).

Spider-Man’s ability resolves before any of the steps of the process detailed in the “Enemy Attacks” section are performed. -(Official FAQ)

A: There is no timing difference between “attacks” and “initiates an attack” so the Forced Interrupt would take priority over the Interrupt. We used the “initiates an attack” language with Spider-man because early testers showed some confusion about when to trigger his ability, and phrasing it this way helped them to understand. -(Developer Ruling, Hall of Heroes)

Spider-Man’s card pool is focused on mitigating the Villain’s turn. He plays very much in the moment with very few cards that stick around for the long-term.

If you found this review helpful, like so that I can write more reviews :)

As a rundown, his alter-ego, Peter Parker, offers middling healing (set at a base of 3), but shores that up with the ability to generate a science resource for free every turn. This gives him the ability to do some nice setup, especially when you combo him with the Helicarrier, effectively making one two-cost card free every turn.

Unlike several of the other heroes, you're going to want to hop out of Peter Parker pretty quickly, since 13 of his 15 special cards can only be played or used in hero form. So if you're sitting around as Peter Parker, you quickly ramp up the threat on scheme, in addition to hoarding cards in your hand that can't be used.

Once you're in as Spiderman, though, the hero becomes very powerful. Getting an extra card draw every turn helps mitigate his relatively low health (compare that to She-Hulk's 15, or Iron Man's 17, when fully upgraded). This means that you'll want to defend a lot more often to offset potential damage and allow Spiderman to stay in hero form for as long as possible. Cards like Backflip and Spidersense help you prevent damage and bad effects, as well. Overall, his high base defense gets him out of a lot of trouble, which helps with the early Rhino scenarios where the villain can pound in for upwards of 6 or 7 damage at a time.

He also has good damage potential, with a decent base attack of 2, and kicks that let him dish out 8 damage at a time. This can make a huge difference when soloing. Moreover, he has one of my favorite allies in the whole game: Black Cat. She can grab you a few free cards when she comes out, and then she gets to attack for free, unlike the other allies in the game's base set.

Overall, Spiderman is an excellent hero to start deckbuilding with, but it will take more experience to really unlock his potential. Timing when you choose to defend is a critical decision point, especially when soloing. In a team game, he gets even better, since the other hero can draw away some of the heat when things get tight. Spiderman has tons of potential for new and experienced players, alike.