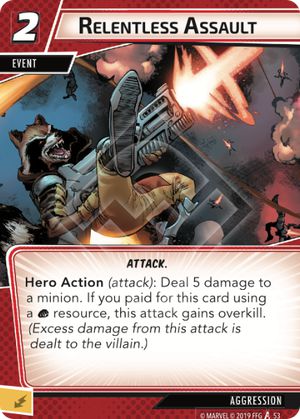 I think that this is my favorite damaging event in the aggression aspect right now. It's capable of dealing out five points of damage for only two resources. The value for that is better than any that we have seen so far.

Uppercut and do this same amount of damage for three resources. A single resource means a lot in this game. The two resource slot on a six card hand means that you can play two of those in a single turn without additional aid.

Uppercut is always useful when you see it and Relentless Assault forces there to be a minion in play in order to take advantage of it. Therefore while this might be a two of in a solo deck I will typically consider this a three of whenever I'm playing with multiple people since the chances of a minion being in play when you find it are much higher.

Not only does it do five points of damage though, it is basically capable of splitting up the damage how you need it. Damage never goes to waste with this aggression card.

Bronze · 172
Not to mention what it can do for an Embiggened Kamala Khan that can easily double-tap it for 7, then 5. — Voidrift · 79 1/8/20
Due to the game's resource system, I feel like cards with a lower floor and a higher ceiling become better than in other games, since you can always use them as resources when they are at their floor. Relentless Assault + Power of Aggression is one my favorite things to do now that I'm moving into Heroic difficulty, and it's thanks to that principle. — Blackhaven · 1 12/13/21