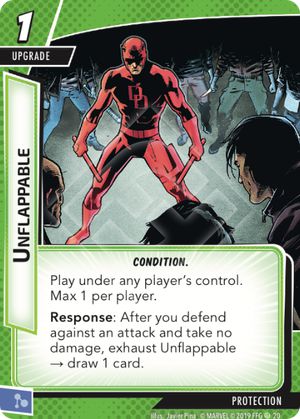 Q: Can I defend with an ally so that my hero does not take any damage in order to trigger Unflappable?

A: No, Unflappable only triggers when you defend with your hero and take no damage. -(Developer Ruling)

A: The wording “after you defend against an attack and take no damage” means that you only check after the attack resolves, and you’re only checking to see if you take damage at that time. The effect does not check if you took damage during the attack. -(Developer Ruling, Hall of Heroes)

Incredibly efficient card for so low cost. Definitely put in high defense heroes to start or heroes you can buff up with the likes of Armored Vest or Synth-Suit or combo with Desperate Defense or Expert Defense.