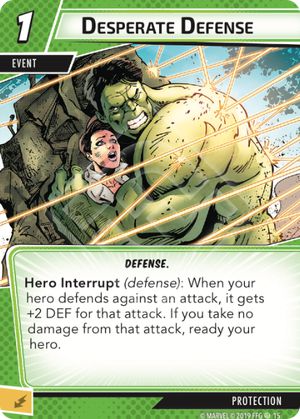 This is one of the staple cards for a Defend action deck. The general idea is that you have a good enough defense to reliably trigger the ability to ready your hero, and thus you end up spending two effective resources to cancel an enemy attack. This is really not bad, not quite as efficient as having allies block for you, but close, and simpler to set up and reduces the demand on your always valuable allies. But the real kicker for this card is when you combine it with Defend action bonuses like Unflappable, stacking on bonuses like that are the real heart of a true defender character.

In general I find this card much better than Indomitable, as defender characters generally have lots of ways to ensure that no damage gets past their defense, and if your defense isn't very good you shouldn't bother with Indomitable either.