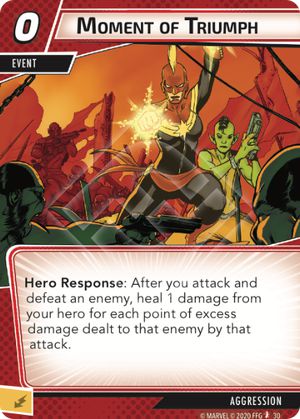 Does Moment of Triumph (excess damage heals) still work when the attack has overkill, or is overkill simply its own reward?

It is intended to work and was always tested that way. Though I definitely see why there’s confusion. I think in the next rules update, we need to rethink how overkill is worded. Even without effects like Moment of Triumph, overkill currently states that it only operates when an ally defends against an attack, which isn’t entirely true.

Overkill applies whether or not the ally defends, but it just so happens that the most common way for an ally to get hit with an attack is by defending. So if we’re addressing that anyway, we’ll also make it clear that overkill and Moment of Triumph do combo.

In case you ask yourself