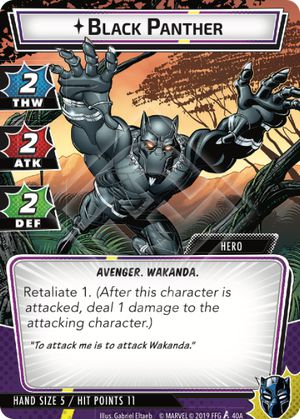 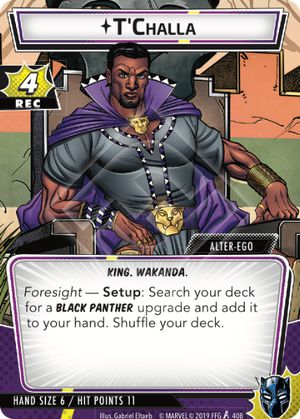 Q: If an enemy initiates an attack against Black Panther but another hero or an ally defends against that attack, will Black Panther’s retaliate ability trigger?

A: No. Black Panther himself must be attacked for retaliate to trigger. -(Official FAQ)

Q: If Black Panther defends against an attack, will his retaliate ability trigger?

A: Yes. As long as Black Panther himself is attacked, retaliate will trigger. -(Official FAQ)

T'Challa went through an interesting arc during the pre-release period of Marvel Champions. Initially downplayed by much of the community as the combo-wombo Core Set Hero who wasn't named Iron Man, he was the first Champion I personally saw being written off. The initial impression was that he was too easily stymied by bad draws, and had too low of a ceiling for a combo deck.

Luckily, a few members of the community had other ideas, and the place Black Panther currently finds himself in with regards to higher level thinking about Marvel Champions is good- in fact, I'd argue that he's maybe the most future-proof Hero currently printed. Let's talk about what Black Panther really does, and how that's probably not what you think.

With five copies of Wakanda Forever! jumping off of his list, it's very tempting to think of the deck as being centered around it, and that's not completely wrong- T'Challa does want to prioritize building his suit, and he's made incredibly awkward by getting too many of his critical cards at once. It feels rough to pitch Black Panther upgrades early because the ideal is to get them on the table comfortably during the first pass of the deck, so that the second run through and beyond is a streamlined, multiple-Wakanda-Forever-a-turn valuefest. And make no mistake- Wakanda Forever is offering value, above all else, and you'd be hard pressed to find another hero who can match the late-game potential of a Black Panther with every upgrade on the board and a ton of card draw. Not easily found is a villain who can withstand very many multiple-Wakanda-Forever onslaughts.

This is a lovely dream, and frankly, it's almost certainly going to pan out for you- but it's also neglecting one of the biggest strengths Black Panther has to offer the enterprising Champions player. He's the combo character that doesn't actually need to be fully set up to make an impact.

Smart use of T'Challa's "Foresight" setup ability makes Wakanda Forever relevant from the very first turn, and by all means if you can use that or Black Panther's balanced stats to put out early fires to stabilize the board, you should. Panther Claws and Tactical Genius offer exceptional value from Wakanda Forever by themselves, and in minion-heavy scenarios Energy Daggers is worth fetching, too. Beyond just Black Panther's suite, going forward EVERY upgrade that FFG prints for Marvel Champions has to be looked at first from the perspective of this deck- the deck that has Shuri. Already, deck-defining upgrades such as Jarnbjorn become a lot more alluring with a built in way to go grab them, and Shuri's ceiling will only rise as the cardpool expands.

It's hard to overstate how impactful this flexibility is- Tony Stark isn't going to be remotely functional while he sets up, but there are no such restrictions on the King of Wakanda.

Speaking of T'Challa's kingship, having an entire nation at your beck and call has perks. His suite of economic cards- Ancestral Knowledge, The Golden City, and 3 copies of the ludicrous Vibranium are unparalleled, now and likely for the duration of the game's life.

Energy Absorption is the only real comparison for pure spending power, and that card has very specific purposes within the context of Carol Danvers and her 15-card suite. It's so critical for Captain Marvel not to waste those that they're better thought of as more of a combo piece within her deck. T'Challa, on the other hand, hits the table offering pure economic superiority. The other heroes in the game are limited to Energy, Genius, and Strength for double resource cards, which means that Vibranium alone is doubling the amount of economic burst available to us, and those doubles are to boot. It's patently ridiculous. Not only do these cards enable easy removal of nasty villain upgrades such as Sonic Converter, but they also mean that T'Challa's turns are just regularly smoother than most of his companions'. Black Panther is, on top of his inherent flexibility, more capable of experimenting freely with resource-intensive strategies than any other Hero in the game. If a concept is too expensive to work for T'Challa, that concept is simply too expensive to work.

As high-cost cards continue to come out for Marvel Champions, more and more players will learn to look towards Wakanda to try those builds for the first time. They will come for the economic flexibility and they will find that Black Panther is so well rounded that they may not have a reason to leave. In a game that hinges upon making smart decisions with your resources, with finding the most efficient lines of play, players will come to realize the real power of Black Panther's design. You don't choose the black suit merely to look awesome and to string together big endgame combos with Wakanda Forever.

You choose it to be rich.

ImpossibleGerman · 10025
The 5 wakanda forevers in black panthers deck clearly makes me want to try a cycle deck. Ive been seeing leadership and aggression decks but i think one of the best things i can come up with is a protecrtion build. With enough 1-2 cost upgrades you can put out. Im playing with 2 other people so im gonna try a protection deck which will have a total of 17 cards that dont return to the deck/discard ever. That means ill get to the point i have 23 cards or less in my hand/deck and cycle to those wakanda forevers incredibly fast. — Hadre514 · 1 10/14/20
5

So it's been about a year since my first game of Marvel Champions and, while I was playing this week end, I thought about how much the game has evolved over the year. One thing comes to mind: how Black Panther, that I initially considered awkward and who was sometimes tagged as under-powered by some, ultimately became a very reliable hero for me. When I began comparing what each hero brought to the table, I realized he's actually average most everywhere, but very adaptable and steady. Imagine you're going through your deck and playing every hero card possible without too much problem. You attack or thwart one turn out of two, recover the second turn. Depending on how you play Black Panther, here's what you might get:

ATTACK: you're playing attack only. So you deal about 3x 2DMG (basic), 6 times Wakanda Forever! (the 6th because you had Ancestral Knowledge played) which can be 6 DMG if you have all upgrades in play, retaliate 3 times, and have Shuri attack for 3. You've dealt 48 DMG only counting hero abilities and cards, which only Iron Man or She-Hulk can beat (in the base box).

THWART: you're only thwarting. you THW 3 times, have Shuri THW 3 times, use Tactical Genius to the fullest 6 times. THW value 21, beat by Iron Man and She-Hulk.

DEFENSE/Survival: you can defend for 2, but also heal 2 each time you use Vibranium Suit. No utilities, however, like STUN or CONFUSE. Not Spider-Man class, but decent.

RESOURCES: here's what most people consider to be Black Panther's strenght: 3 Wakanda Forever!. Now, if you consider that a lot of heroes have some way to get more resources (Web-Shooter, Super-Soldier Serum, Pepper Potts... etc), Black Panther isn't alone in the "resourceful" department. However, his are free and , meaning he gets an economical boost right off the bat (althought lesser than Captain Marvel) and is actually the best for cards that require certains resources (Tackle, for instance. The Golden City, finally, is incredible and should always be a priority.

SOOOO... where does that lead us? Knowing what you NEED as Black Panther will actually allow you to adjust thanks to FORESIGHT. If Spider-Man is the defense champion, Iron Man the "ramp", Captain Marvel the draw power and She-Hulk the THW and Fist, Black Panther certainly is the jack-of-all-trades.

All in all, Black Panther benefits from longer games (a real boon for expert players), a certain foresight on your part and a strong economy. The first year also gave us lots of way to exploit his uniqueness (Mean Swing, the infamous Rapid Response- Shuri combo, etc.).