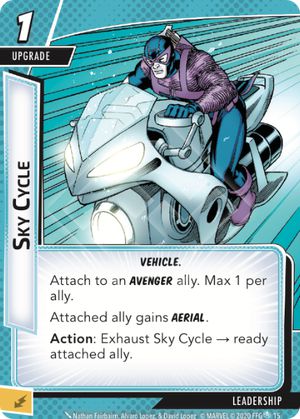 This card may not look like much at first glance, but in the right deck it can be quite powerful. Generally you want to use it in one of three situations:

1) With an ally that doesn't take consequential damage. As of this writing the only avenger that fits the bill is Blade, anyone else will likely require honorary avenger to attach this card. This essentially doubles this ally's output every turn, which can be especially powerful with other attachments in play.

2) With an ally that buffs its stats temporarily. So far this includes Goliath, Power Man, and Vision. For Goliath and Power Man you're basically building as part of a larger one-shot combo that will likely include other cards; you'd likely pick get ready over this first, but this can be useful if you want extra cards to ready allies with (while providing the benefit of not requiring you to play it on the same turn the combo goes off). For Vision this essentially makes his ability add an extra 4 damage or thwart a turn for a resource, so you'd likely want healing cards or extra hp to prolong this benefit.

3) An ally that exhausts for a unique but useful ability. Currently this only really includes Wong (who'd need honorary avenger), but there may be others in the future.