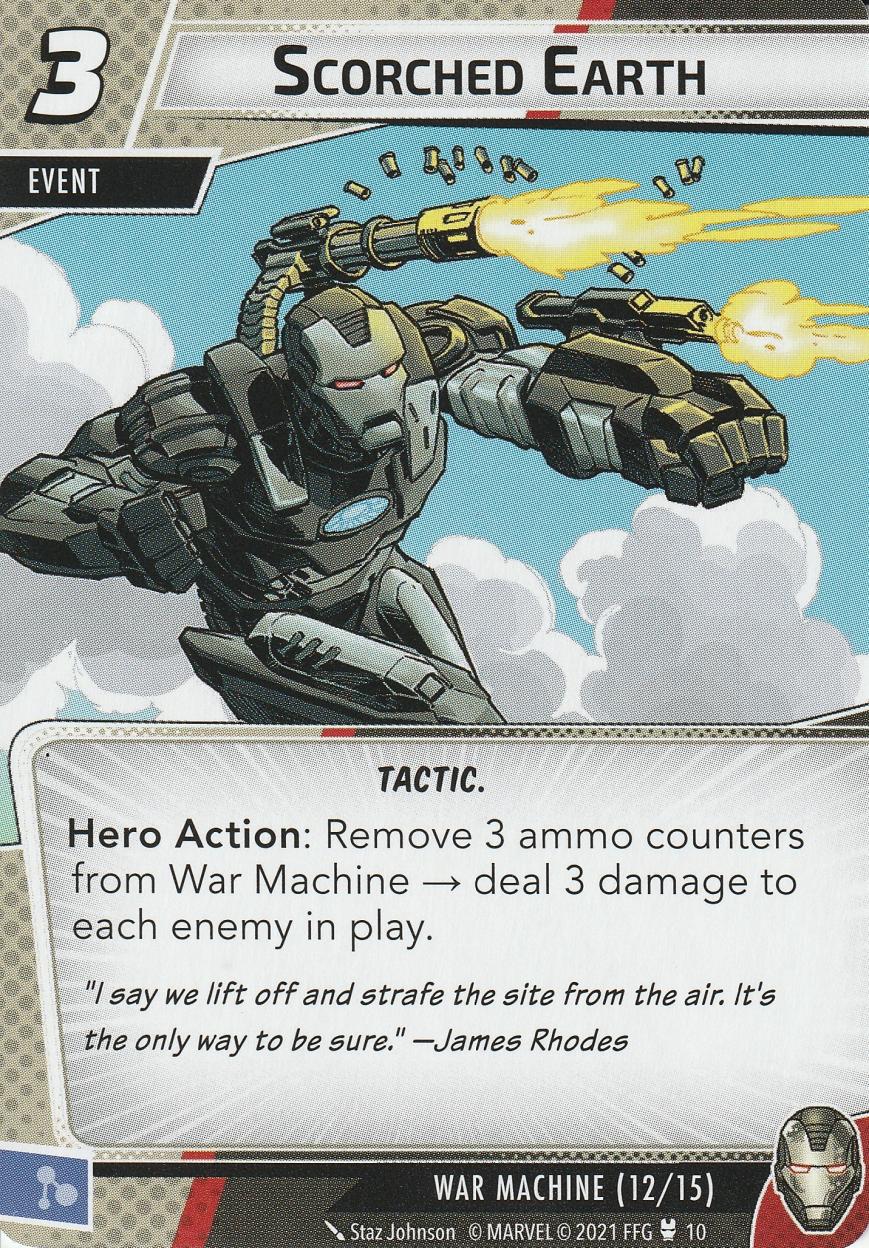 My first comment is that it appears that someone switched the art with Full Auto and Scroched Earth. I'm pretty sure that a couple machine guns is not going to provide the "Scorched Earth" effect. Unloading your entire arsenal in a small area? That results in Scorched Earth.

So. Scorched Earth is a situational Event that is a little too expensive.

Scorched Earth is unfortunately costed at 3 plus 3 ammo; I'll say it plainly: it should only cost 2 plus 3 ammo. Compared to Rhodey's own Full Auto (2 plus 4 ammo counters for 8 damage), this card rarely sees maximum efficiency. In a solo or two player game, it is unlikely that you will have two or more minions out and draw this card and have nothing better to play.

I feel like this is once again showing one of the design flaws of the game: costing situational cards as if they will always return their maximum effect, even if the requisite situation doesn't happen very often. Cards with unusual requirements should cost according their average effect, allowing the player to feel awesome when the exact best-case situation comes up, instead of going "ugh, I'l not paying three and three ammo counters for six damage". With Shoulder Cannon and Missile Launcher out, you can do 6 damage with four ammo counters and doesn't cost any cards from hand, and the damage is precise (you are unlikely to waste any damage), and the Shoulder Cannon can take care of any Tough cards out.

The saving grace to this card comes after you have built up a bit. Once you have both Gauntlet Guns in play, the cost and Ammo Counters requirements is much easier to handle. In minion heavy scenarios, this card could be a life-saver. Also, should you find yourself in a 3 or 4 player game, this card may come up Aces and put out 12-15 damage. For better or for worse, that VAST majority of Champions games are played with 1 or 2 Heroes, and Scorched Earth just doesn't shine at those player counts.

I rate this card a C: Too expensive and situational to be of use most times it comes up in your hand, In 3-4 player games or minion heavy scenarios, I rate this card a B: Will usually be useful if you can afford it.