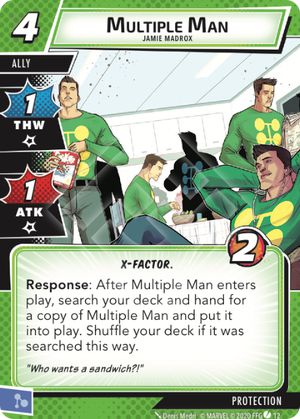 'Bah!' and 'humbug!' I say. While multiple man looks pretty good on the surface, I find he rarely comes up in a way he's usable. If you aren't able to get all 3 copies into play (because 1 or more of them are in the discard pile) you're paying 4 resources and 1 card (possibly 2 if both of the multiple mans are in your hand) for 2 allies with 1/1/2 a stats. So he'll net you a 2 ATK or THW and then each of them will (most likely) block a blow.

While blocking 2 hits is pretty good, the cost of 4 just makes him unpallatable for me. Seeing as that's all you'll be doing that turn. I'd much rather play two allies in consequetive turns. Also giving me the flexibility to change plans should that be needed.

As always: Don't let yourself be tempted by the 'one in a million' chance that you've got your board set up and you pull into the first copy of Multiple Man with 2 'double resources' into your hand. There's just more consistent cards out there that'll do more work.

Peroxda · 4
I think I disagree with your overall assessment here. Yes, he isn't brilliant when you get 2 blocks and 2 atk/the but he isn't terrible either. And being "ok" in his failure case is perfectly fine to me because his success case is crazy strong. 3atk/the and 3 blocks is easily worth the 5 cards invested. It's very easy to get him out right at the start of the game to flood out allies and when you do he both helps clear an initial board (e.g. thwart away a side scheme) AND he gives you protection to set up by blocking the villain for the next 3 turns. Provided you are willing to discard whatever else you drew and prioritise him on your first turn he is worth including in your deck. — L3w15 7 · 7884 3/15/21
Multiple Man seems really strong to me in Solo. If you play him as soon as you see him you get three turns to set up which is very valuable. You can't rely on three cheap allies coming in to your hand as neatly so this is very valuable consistency early in the game. — adsarf · 184 3/15/21
Very true. To bring out 3 cheap allies would require something like Ironheart+Maria hill+stinger but even that will require 6ER as opposed to 5ER from multiple man. — L3w15 7 · 7884 3/16/21
I provide the mandatory Nadia Van Dyne shout out, but Wasp probably doesn't want to spend time out of hero form too much — Stretch22 · 189 3/16/21
I completely disagree with this, MM is really powerful and definitely one of the best cards in Protection. If you mulligan for him you're got close to 70% chance of dropping him turn 1 and in that scenario of deciding how many to mulligan for most of the time you'll get all 3 copies. He's like a combination Webbed Up and Nick Fury all one card that buys you SO much time. I went through the RORS campaign barely changing my Protection deck and MM was the clear MVP for the whole campaign. — StayOnTheLeader · 1523 3/23/21
I have never been unable to play the first Multiple Man I drew, and only once decided not to because I had more important cards to play, so I have no idea what OP is on about with "rarely comes up in a way he's usable". And guess what, that time I decided not to play him? I didn't play the other two copies either, and used them for the same 1 resource any other card gives, then on my second go through the deck I played Multiple Man. — Thatwasademo · 1 3/23/21
Even if that was a fluke and I'm just unreasonably lucky, it's important to note that cards don't really need to be "consistent" in this game -- you can always just play a different card and spend them as a resource if they're irrelevant. — Thatwasademo · 1 3/23/21
From a math standpoint, a cost of 4 for 3 THW and 3 blocks is good, but a cost of 4 for 2 THW and 2 blocks isn't (Mockingbird gives you as much for 3). Whether or not to use MM, I think it all comes down to this: are you WILLING and COMMITED to playing Multiple Man or not? You can't just go halfway, cannot just include 1 or 2 copies in your deck, cannot pass the first two and then change your mind (or you can, but it's not efficient). TBH I see the point where you may not want to use 3 slots out of 40 for MM, but if you make it a point in paying the first occurence you get, he's actually pretty good. — neothechosen · 4875 3/31/21
Well, I didn't expect to see this much feedback to this comment, but good to see people have an opinion about this one. I'm still sticking to my guns on this one though. Every time I try to include MM he just ends up fizzling. I don't want to be playing him first turn since the hero's I usually play have other cards they want to get out (Iron-man, Miss Marvel, Quicksilver). So he's in the way of me setting up my board state. Looking at all the feedback I'd say there's plenty of other people playing differently than me with succes. So there's multiple ways to go on MM! — Peroxda · 4 4/8/21
I have only one question: If I have three copys on the table, is he considered as one ally or three..? — btheone · 1 5/25/21
He is considered to be three allies — Captain Carrot · 1 5/30/21
If the multiple copies of MM only counted as one ally, this would be a MUCH better card. — MightySchoop · 2 6/13/22