Hero Interrupt: When you make a basic attack, you get +10 ATK for that attack. If you paid for this card using only resources, that attack gains overkill. 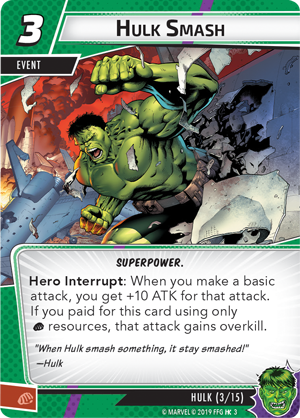 Let's not kid ourselves: this card is the true reason to play Hulk. For 3 resources, you get 13 total damage after including Hulk's basic ATK, for 4.33 damage per resource (3.25 if you include the cost of playing Hulk Smash itself). That's honestly kind of insane when the average is about 1.5 to 2.5 damage per resource, even if it does basically cost you your whole hand. The value obviously gets better if you can boost Hulk's basic ATK and play it using Limitless Strength, but the normal value alone usually justifies playing this over anything else in your hand. The major drawbacks are that: a) it's not an attack so Martial Prowess won't help with the cost; b) drawing two in the same hand or after playing Drop Kick means it'll get wasted; c) it's useless if you're stunned, exhausted, or the villain/minion has tough. Despite all that, the card still nails that glorious feeling of straight up bulldozing whatever unfortunate puny enemies happen to be in your path.