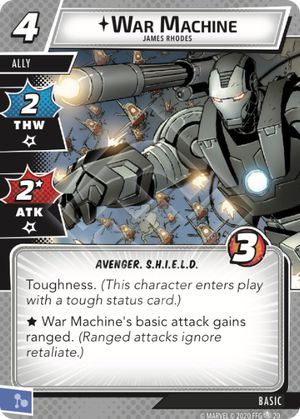 Quite surprised of not seeing this in many decks. For me is one of the best allies in the game. Thougness is awesome, and it has good stats. It can easily block you an attack, Thwart/attack two times, and then be sacrified to block another attack. Taking 2 villain attacks and attack/thwart of 4 at the cost of 4 resources looks like a good deal to me.

I specially like it in Nadia Van Dyne's decks, as it can be recycled with G.I.R.L.

Also, I'm not 100% sure of how it interacts with Rapid Response. I'd say that it enters play with a Tough token and then, that token is removed by the Rapid Response text. Can anybody confirm that at 100% ?

wehehe · 89
My thoughts exactly. — neothechosen · 4875 6/17/21
The new venom justice ally just announced for nebula's hero pack also makes this card seem very strong. Best case scenario the new venom ally is a 4 cost 2thw 3atk which is arguably weaker than this. — L3w15 7 · 7884 6/17/21
I think your Rapid Response interaction is correct — Stretch22 · 189 7/12/21
Your assessment of WM's interaction with Rapid Response is correct because of the word "and*. You first complete putting War Machine into play (placing a Tought status token on him) then continuewith the second part, dealing a damage and removing his Tough token. It makes him a harder sell for targeting with Rapid Response, as a lot of hius value comes from that block. — Judicator82 · 55 4/13/22